My last post was last Friday, since then I’ve managed to settle in a bit more, and have a few more adventures!  Let’s get caught up, shall we?!  **Nerd Alert**  While in England, I have noticed my history nerd coming out more and more – I love it!  However, the more places, palaces, castles, ruins, homes, etc. I come into contact with, the more history that may enter these posts.  I will try to keep it short – or tangent off into another post completely if I get carried away.  Feel free to contact me if you’d like to chat history!!!

On Saturday, 17, January 2015 one of the other Artists in Residence, Naomi and I took a little day trip off adventuring.  Stopping briefly at a church in main Odiham (see pictures below) on our way to Odiham Castle. 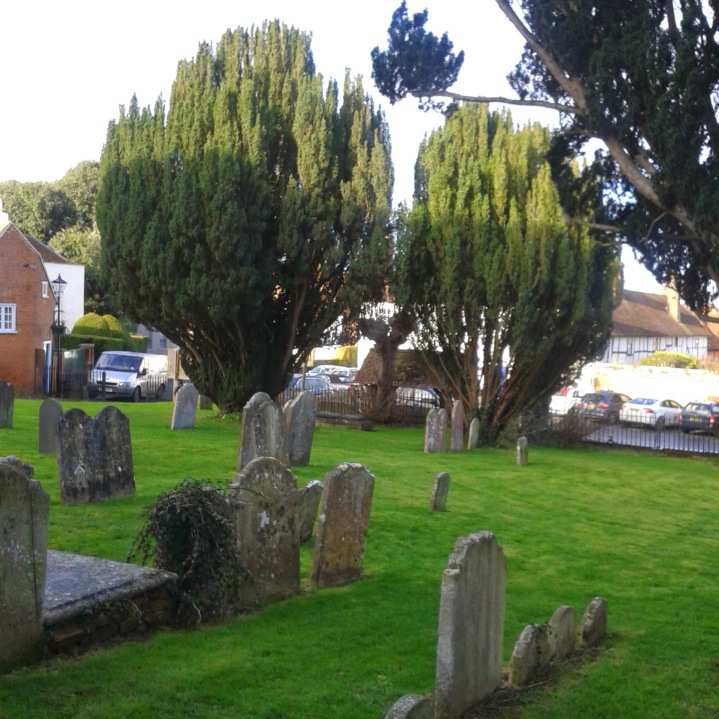 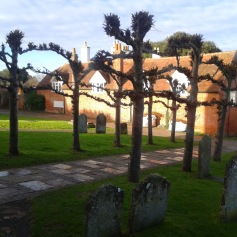 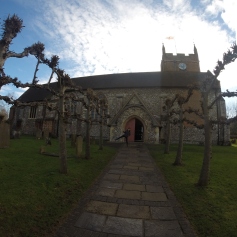 Only the outer shell and keep, built around 1207 by King John remain of Odiham Castle.  King John (of House Plantagenet) was the youngest of five sons of King Henry II and Eleanor of Aquitaine (who was previously married to Louis VII of France) and reigned from about 1199-1216.  King John was also brother to King Richard who was on the throne during the time of the Crusades – King John is also noted to be the influence behind the villain Prince John in the Robin Hood legends (major Womp!)).
The ruins were pretty cool.  Nestled along a river in the country, we had to cut through a field to reach the path – following the river to the castle itself.  For this days’ adventures, I remembered to charge the GoPro.  It was a great day to start testing out what this camera is capable of and how I can take pics with the “selfie stick” I purchased just for this trip!  Here is a small sampling of what testing this baby out came up with.

Ha, does this thing work? 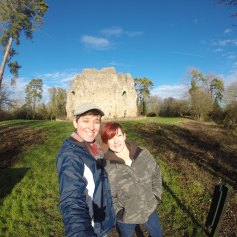 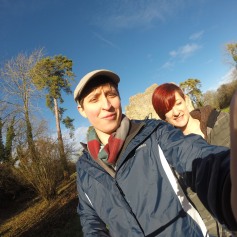 seriously… is it working? 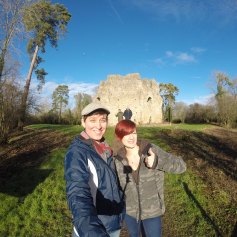 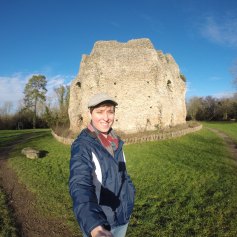 Selfie on the boring end of the castle 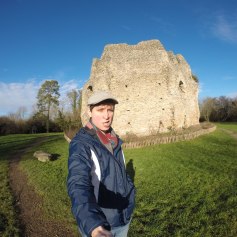 An extra face, just for all of you 🙂

Can you spot Naomi?! 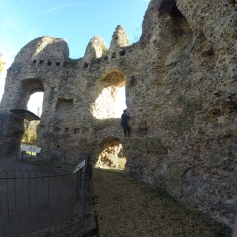 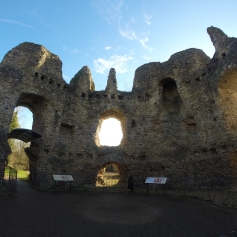 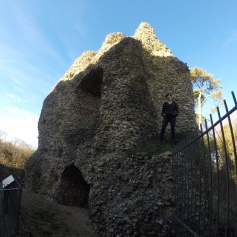 Hope you enjoyed those…  I had fun trying to figure out the GoPro, and realized later on that I could have taken some awesome selfie’s within the main area of the ruins. Oh well, better known for next time!
Next up on the adventure list: The Vyne.  A 16th Century home built for King Henry VIII’s Lord Chamberlain, Lord William Sandy.  Only 1/3 of the original home still stands, however the Tudor style Chapel (fit with stained glass), grounds and history still present are stunning. The home is nestled within woods and wetlands of Basingstoke, Hampshire, England.  I must admit, I enjoyed the grounds more than the home, however there was a very cool old man who works for the home who was chalk full of interesting historical facts about the home and its former inhabitants. I could have stayed and talked history shop for hours!  However by this time, is was getting late, and Naomi needed to get back for work.

On the way out of the grounds, Naomi and I noticed some AMAZINGLY orange colored wood – the product of a tree cut down recently and damp from the rain.  Excited by the color, and interested in seeing what the wood looked like when it was dry, we snatched a few small bits and took em home.  I am currently in the process of making some jewelry out of it.

Over the rest of the week, I have started a variety of projects, more to come on those as they come about (I don’t want to ruin anything) and lots and lots of sketching.  It’s also been a week of getting into a routine, running errands (sending a postcard to mom – Hope you got it!) and getting to know some of the people here a bit better.  Hanging out with Hannah and her friends Kelly and Lucia.
This week also gave light to that first bit of “feeling alone.”  Even though I am almost always around someone, or people, I’ve had some down time and have starting missing some things about home.  Thankfully there is Google hangouts and Skype and those lovely technological marvels that allow me to text, talk and see the people I’ve been missing.  There has been time to slow down, think about what I want, and what I’m working towards.  Time to contemplate projects, trips and how to see/adventure to ALL of the places on my list. – It all left me a bit overwhelmed.
One thing at a time – Narrow down and follow through.
Remember, it’s only the second week! haha
Here are a few pictures of hang outs and from the bench.
**Make sure to follow me on Instagram (@mstibj) – I post pictures daily.**

I think that is all for now.  Stay tuned for a possible excursion to London, an adventure to Bath and Bristol, along with a tale from Oxford??!!??!! Oh and maybe even Stonehenge…